All the Crooked Saints by Maggie Stiefvater 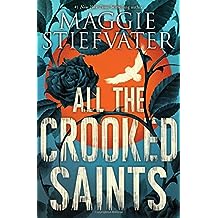 What I love about magic realism is how the realistic aspect of the story pulls you in and allows the arising magical qualities to become so much more believable. All the Crooked Saints takes place in 1962 in southeastern Colorado in the fictional town of Bicho Raro. Here the Soria family has the ability to perform miracles.

But there are phases of the miracle, and the first miracle is not the end of the journey. The person often gets stuck midway, (like we do in life). In limbo, the person retains strange characteristics, like the giant man who towers over buildings and a girl whose tears continually rain over her. The Soria saints are forbidden to help the “pilgrims” who must work through the rest of their miracles.

One of the best parts of the story: I love how the three Soria cousins, Beatriz, Daniel, and Joaquin, create a renegade radio station in the middle of the high desert, broadcasting their illegal signal in the dark of night. At first, the radio station serves Joaquin’s creative desire to be a DJ known as Diablo Diablo. But as time passes, the trio uses the radio to work their own miracles for the pilgrims living at Bicho Raro.

But it’s not only the pilgrims who confront darkness in their lives. Even the Sorias are faced with confronting their own darkness. This is a unique, magical story of three young people who break the taboo of helping others. In doing so, they experience the miracle of discovering themselves and where they fit in among the saints and pilgrims of Bicho Raro.

The author describes southeastern Colorado to the point the reader can feel the arid heat on his arms amid the floating scent of tangy sagebrush. Even more important—-in the skilled hands of Maggie Stiefvater, the characters spring to life, like flowers blooming in the high desert!

“At the time I first realized I might be fictional…”

What an intriguing first line to this novel. Much later in the story, the connection to this statement will be revealed.

I had heard this book was about a girl with OCD, which would be interesting in itself, but John Green weaves in so much more into this story.

Sixteen-year-old Aza struggles with thought spirals, compulsive thoughts that wind themselves deeper until she can’t think of anything else. When a 100,000 dollar reward is offered for the whereabouts of a fugitive billionaire, Aza and her hacking friend, Daisy, decide to investigate. In their favor, Aza was once friends with the billionaire’s son, Davis.

The reader gains insights into Aza’s problem and comes away with a new compassion for those who struggle with such disorders. We experience Aza’s world of OCD through her experiences.

But another storyline is just as compelling.

We glimpse the suffering of Davis and his younger brother. They live in a mansion with everything material wise they could ever desire. Not only have lost their dad, but they have never had a healthy relationship with their always distant father. As Davis says, “…he really disappeared a long time ago.”

One part of the story bothered me. Davis refers to booze, money, God, and fame as rotting people from the inside. In a real relationship with God comes strength, hope, and love. I didn’t like God being thrown in with the problems related to booze, money, and fame.

Aza and Davis find themselves attracted to each other. Aza’s compulsive thoughts affect their relationship and drive them apart at times. Davis, in his loneliness, remains compassionate, but is troubled with the thought that Aza may only be after the reward. He comes up with a solution to the problem in order to determine if Aza truly likes him.

When Aza reads Daisy’s online stories, she recognizes herself in one of the fictional characters. Aza realizes that her disorder makes her irritating to anyone she is in a relationship with. Her friendship with Daisy is tested.

Aza’s problems intensify, and she lands in the hospital. Without giving away any spoilers, I’ll just say her disorder leads her to some very strange actions.

Davis writes poetry online under an assumed name and also comments on other poets. His poetry is powerful.

John Green writes a moving, compassionate story in Turtles All The Way Down. Highly recommend!

Seventeen-year-old Josie Moraine lives in the French Quarter of New Orleans. The story takes place in 1950. Although she’s the daughter of a brothel prostitute, Josie was taken in years before by a local bookseller. She works in the bookstore after school and sleeps in an upstairs room in the shop.

Though Josie also works part time cleaning at the brothel, she wants a different life from her mother’s. Josie yearns to attend college but worries about how she can afford to attend. One afternoon, a customer comes into the store and discusses books with Josie. He encourages her to go to college. Josie, who has no idea who her father is, sees this educated, kind man as the dream father she’s always wanted. When he turns up dead a few days later, the mysterious death begins to point to her mother and her shady boyfriend.

Josie is drawn to two young men, Patrick, the bookstore owner’s literary-loving son, and Jesse, a good-looking boy from the lower side of town who also strives for a better life. When her dream of higher education looks out of reach, a man offers her big money if she’ll follow in her mother’s footsteps.

This book gives an intriguing insight to life in the New Orleans underworld of the 1950s and a young woman’s struggle to find a better life against all odds.

Check out my bookstagram posts! @lucindastein

I loved this book by author, Catherine Ryan Hyde. In Take Me With You, a burned-out teacher, August Shroeder, spends his summer traveling across the country. This summer, he plans to spread the ashes of his deceased son. When August’s RV breaks down, the mechanic makes a strange offer: take my two young boys for the summer in exchange for the cost of repairs. Turns out, the mechanic, a single parent, has jail time to serve and no way to take care of his sons.

At first, August thinks no way–this is insane–but soon finds he can’t disappoint the young boys who have never been on a vacation in their entire life.

One of my favorite things to do is camp and sightsee, so August’s travels appealed to me. In fact, I’ve visited two of the destinations in the book, the fantastic natural formations in Bryce Canyon in Utah and the geysers in Yellowstone National Park in Wyoming. But it’s definitely the young boys who I fell in love with and it turns out, so does August. What I enjoyed in the story was how August gave the boys things they had never experienced—a male figure they could count on to keep his word and someone who cared about how they felt. Slowly, it’s revealed that their father has a drinking problem. Although he doesn’t physically abuse the boys, their father leaves them alone far too often to fend for themselves.

But what will happen at the close of the summer? This story promises to pull at your heartstrings. Come along on a vacation that promises much more than simple adventure!

Spellbound Café discusses YA topics of interest, teen reads, and anything connected to reading and writing. Author, Lucinda Stein, will share information on her latest books. Lucinda would love to hear from you about what you like to read or any comments about her posts. Happy reading!