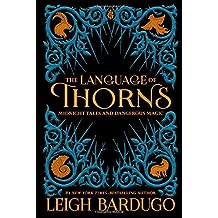 This book cover is one of the top ten eye-catching covers from 2017.  From Leigh Bardugo, author of The Six of Crows, comes an illustrated book of fairy/folk tales. These types of stories require illustrations, don’t they? At least, from childhood we’ve come to expect that. Don’t misunderstand me, these are definitely stories for young adults to adults.  The beautiful illustrations will appeal to readers of graphic novels.

At first, the reader will think she is reading an ordinary fairy tale, those old stories told to children for decades. But the endings will leave you both surprised and charmed!

Sara Kipin’s vivid illustrations enliven this book. There’s not much more I can say about this title. The Language of Thorns demands to be read and seen!

Leslye Walton’s magical realism novel promises to take you on a unique journey into the magical and the ordinary, an elixir of both.

How many of us can relate to this line in the story: Love makes us such fools? But the story moves on to show sometimes it’s a matter of opening our eyes.

The women in Ava Lavender’s family have been anything but lucky in love. It has affected everyone down to sixteen-year-old Ava who is born with the wings of a bird and her twin brother, Henry, who is mute. Because they are different, their mother keeps them sheltered at home away from the town’s critical eyes.

Ava’s grandmother, Emilienne, throws herself into her work at the bakery, believing love is something to be warded off.

Ava’s mother, Viviane remains heartbroken over her first love, ignoring the love that appears right before her.

Teenage Ava dreams about being a normal girl, not a creature with wings that makes people think she is everything from a freak to an angel. Then one day, Ava makes a friend who talks her into coming out to the reservoir, the place teens congregate at night. Her life will never be the same.

But it is Henry, who speaks only when it is of utmost importance, who warns the family of the tragedy to come. Will they listen before it’s too late?

Guideline only: School Library Journal rates this book Grade 9 and up.

I picked this book up, not knowing what to expect except this story would be unusual. Peculiar is a perfect word for it! Sixteen-year-old Jacob has heard weird stories from his grandfather for years. When Jacob was little, he believed in these strange characters–children with special abilities, but as he grew older, he realized the tales were mere fairy tales.

When Jacob finds his grandfather gravely injured outside in the dark, he also sees a monster in the shadows. Or does he? Jacob’s parents send him to a psychologist, thinking he’s having trouble with his grandfather’s death.

But Jacob remembers his grandfather’s dying words, as strange and coded as his many stories, and Jacob is determined to go to the remote island where his grandfather lived as a boy–Miss Peregrine’s Home for Peculiar Children. There he finds the ruins of the building, walls crumbled from an air attack during WWII. But soon he realizes the house is not abandoned!

You’ll enjoy the many real–strange–photographs in the book. The author, Ransom Riggs, perused through vintage photos in flea markets and antique stores, which he used in writing the story. I found myself intrigued with the book, turning page after page. Read the book before you see the movie! If you like series, two sequels to this book are already available: Hollow City and Library of Souls.

Lovin' this book! Since the grandfather who lived during World War II plays a big role in the story, it was the perfect opportunity to use my vintage items. Bakelite spoons, old dice, antique lace-up boot, and a hand mirror, it's handle worn and varnished from years of use. Also the photograph is one of my ancestors. Bit busy perhaps but I had fun with this pic. #bookstagram #bookstagrammer #beautifulbooks #coverlove #bookish #bookishlove #bibliophile #booknerd #booklover #lovetoread #vintage #antique #yalovin #YAlit 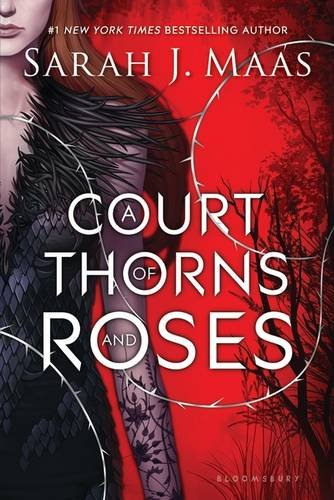 edge of a magical land called Prythian—a land of faeries. Living in poverty after her father lost his fortune, Feyre hunts for their food, keeping the family from starving. While out hunting one day, she kills a wolf.

Later a fearsome creature breaks into their cottage, seeking revenge for the death of one of its own kind. The wolf Feyre killed turns out to be a shapeshifter who was actually a faerie. The creature called Tamlin drags Feyre away and across the border to Prythian. At his estate, Tamlin allows her free access of his mansion and estate grounds. Instead of killing her, she’s allowed to live according to the regulations of an ancient treaty. However, she can never return to her family. Ever.

Feyre panics over her family’s survival, but Tamlin assures her he has taken care of her family. Over time, she realizes Tamlin truly means her no harm and slowly finds herself attracted to the lethal, immortal High Fae.

She learns that a blight across Prythian endangers the High Fae and has lessened his magical powers. Tamlin’s estate and even his life is in danger. To protect Feyre’s life, he sends her home. But Feyre’s love for Tamlin leads her back to incredible danger and deeper into the secrets of Prythian.

In an intriguing version of Beauty and the Beast, Sarah Maas leads the reader through a story of magic, war, and fated love. Well written, the book contains plenty of conflict and mystery. Due to scenes of sexual and violent nature, I recommend this book for New Adult or older YA readers.

Six of Crows by Leigh Bardugo

The chatter on Twitter had me curious about the fantasy book, Six of Crows. It’s an ambitious book at 462 pages and packed with adventure, violence, and intrigue. A motley group of six outcasts attempts an impossible heist to abduct a prisoner from the impenetrable Ice Court. By the second chapter, a confrontation between two gangs erupts, and the high action of this story is on!

If you find the sheer number of characters confusing, hang in there and the story will soon come together.

Kaz is the leader of this group of young criminals and outcasts. Some say he’s a devil, others call him Dirty Hands. As an orphan, he came from the streets and worked his way up to be a gang leader. He also runs the Crow Club. He’s known for being cold and ruthless.

Inej is call the Wraith for her exceptional power to move undetected. She works as a spy for Kaz.

Nina is a beautiful Grisha Heartrender, who has the supernatural power to burst the heart in your chest, steal your breath, and rupture your cells. She escaped a slave ship and now works for Kaz.

Matthias is a drüskelle, a member of the military who abduct and kill Nina’s kind. He calls Nina a witch.

Jesper is a lanky teen who loves his pearl-handled revolvers. He has a compulsion for gambling to the point that he’s in hock up to his neck.

Wylan is the son of a powerful mercher. He had all the privileges of the wealthy but chose to run away from home.

Kaz’s crew attempts the heist of the century, knowing full well the odds are against them. If they succeed, they will all be very rich. Violence is a way of life in the Barrel where poverty nips the heels of those trying to survive and make money at any cost. To add to the intrigue, Kaz who is known for being coldhearted, has feelings for Inej but refuses to act on them. Sparks fly between Nina and Matthias, who are mortal enemies.

It isn’t just for the money that Kaz accepts the challenge of the Ice Court heist. A thirst for revenge for wrongs done in his past motivates him to risk all their lives. Some say he has claws, but the real reason Kaz always wears gloves is even stranger! The ending of this story opens the door for the upcoming sequel. I can definitely see this becoming a movie. Read Six of Crows for yourself and see what all the talk is about!