The Lie Tree by Frances Hardinge

Fourteen year old Faith is the “good girl,” the rock, the trustworthy daughter, and considered dull. At the turn of the 20th century, those traits fulfilled the expectations for a girl. The story begins with the family making a hasty departure from England to the island of Vane. Faith overhears a conversation and discovers her father, a minister and a renowned naturalist, has been accused of fraud. Faith doesn’t believe the rumor and doesn’t understand why anyone would attack his reputation. 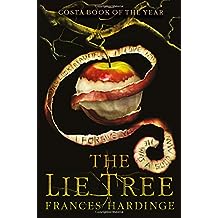 Definitely cover love for this title! The latest cover for the book is one of the most unique and creative covers I’ve seen. I saw an earlier cover on Amazon, which wasn’t as appealing—perhaps why the publisher changed it.

Back to the story, Faith proves to be anything but dull, and when her father is found dead, hanging on a tree beneath a cliff, his death is called a suicide. Faith begins her journey to find out who murdered her father. Before his death, she had accompanied her father to a cave where he hid a plant. This tree thrives in darkness. She begins to suspect the unusual plant is the cause of the scandal—-and the murder.

The unusual tree bears fruit only when someone whispers a lie to it. In turn,

the fruit delivers a hidden truth.

This story is a mixture of historical fiction, magical realism, and mystery.

The author’s research into the time period reveals itself in every detail. It definitely portrays how women of this time period were viewed:

The story kept my interest, and Faith is a well-developed main character. I enjoy magical realism, but I struggled with the concept of a plant comprehending lies. The author created a twist on the biblical Tree of Life, and perhaps it’s only me, but I had trouble with the story’s scenes involving the tree. The rest of the scenes kept me involved in the story. As I said before, the research for the time period is impeccable, and the protagonist is a strong character. Overall, I would rate the book as 3.5 to 4 stars. (I couldn’t decide!)