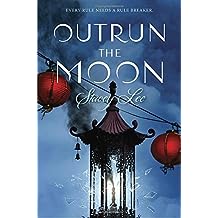 Fifteen-year-old Mercy Wong yearns to break free of the poverty in Chinatown. Clever and determined, she strikes a deal to attend St. Clare’s School for Girls in exchange for a business deal with the president of the board. This is quite a feat since only the wealthiest white girls attend the school.

The story takes the reader through the historic San Francisco earthquake that occurred in 1906. People were forced to flee their homes and businesses after the earthquake unsettled the foundations of buildings, which either crumpled instantly or were in danger of collapse at any moment. Fires overtook the city and food and water became scarce to nonexistent.

Outrun the Moon is Stacey Lee’s second historical novel for young adults, and the genre shines under Lee’s careful handling.

Aspects of the story that I liked:

Enjoy this engaging story with its theme of a young woman overcoming overwhelming difficulties. Definitely add this to your diverse fiction TBR list!