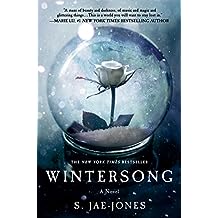 School Library Journal: Grades 9 and Up

Based on German folklore, Wintersong is a fantasy twist on the beauty and the beast theme. This is an ambitious tale—436 pages—full of secrets, danger, and romance with a strong female protagonist.

Musical talent pervades Liesel’s family from her father down to her younger brother, Josef. Liesel loves to compose music for her talented brother, but long ago, her father discouraged her talent. She needed to be the dutiful daughter. Her skills couldn’t compare with Josef’s promising career as a violinist.

One day in the village, she finds her sister, Käthe, staring—enchanted—by a tall stranger, strangely handsome and ugly at the same time. His beauty hurt. Liesel recognizes his face—Der Erlkönig, the Goblin King. She also finds herself strangely attracted to him but knows this is dangerous. She rescues her sister from the spell…but only temporarily.

Later in the Goblin Grove, a place where Liesel has played with her sister and brother since they were children, Liesel comes face to face with the Goblin King—the Lord of Mischief and the Underground, the punisher of misdeeds, and the abductor of maidens. Memories flood back. Little Liesel dancing with the Goblin King, playing childhood games. When Käthe is taken to the Underground, Liesel must win a new game to bring her sister back. But Liesel recalls Constanze’s warnings: “There is no winning with Der Erlkönig. Or losing. There is only sacrifice.”

Liesel finds Käthe in the Underground, but her sister is obviously confused to who she is and why she is there. A trickle of blood, her sister’s nose bleeds. Liesel realizes time is limited if she is to bring her sister back alive.

Liesel learns that the Goblin King’s abduction of brides affects the seasons above the earth. Without a bride, spring would not arrive and every trace of green would disappear on the earth. A bargain is made: Käthe’s life in exchange for Liesel. She must become his bride.

Although the Goblin King was once a human, the goblins in the Underground prove to be spooky creatures. Black pupil-less eyes, claw-like hands, and a hunger for human life. Changelings and the Lorelei—beautiful feminine creatures—both dangerous, also live in the Underground.

The Goblin King encourages Liesel, now his bride, to pursue her music. Also a musician, he recognizes her talent. Soon she realizes he not only loves her music, he loves her. Liesel discovers she is also in love with him.

One day, a goblin informs Liesel that she will live only as long as people above ground love her. She will die once they forget her. Liesel realizes she misses her family. She wants to live. But can she escape the Goblin King and the Underground? Even worse, can she live without him?